The cecropia moth is the largest North American moth, common to Ontario but rarely seen during the day.  It has a wing span of 5-6 inches and very colourful with its red body and white stripes and reddish brown wings.  The cecropia caterpillar eats the  leaves of trees and shrubs.  The cecropia moth does not eat, its only purpose is to mate and only lives a couple weeks.  Differentiating between sexes is easy, the male posses large feathery antennae where females have smaller less bushy antenna, females also have larger more rounded abdomens than males, both lack functional mouthparts or digestive system. To find a mate the female emits pheromones with the male’s sensitive antenna can be detect up to a mile away. This one was hanging out at the municipal office on June 15, 2017. 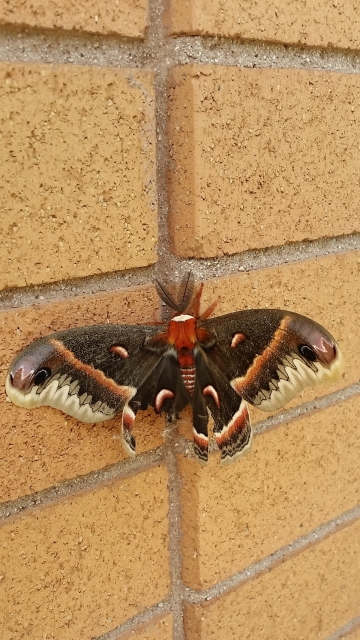